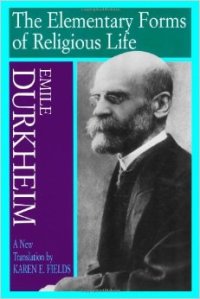 This is a post where I lay bare my true nerditude.  Because Emile Durkhem’s “Elementary Forms of Religious Life” is genuinely one of my favorite books of all time.  So I thought I should review it here.

Durkheim set out to explore what he called the archaeology of the soul in search of the “elementary religion.”  While he’s got some outdated ideas about “totemism” he is really trying to understand how “a hollow phantasmagoria has been able to mold human consciousness so powerfully and so lastingly?”

How, he wondered, does religion have so much power over humanity when it is so different around the world and usually based on such kooky ideas.  If there is no shared belief system, how does the whole idea of the sacred manage to be SO important to people.

Spoiler Alert:  His answer is complex but, in a nut shell, he says religion is: 1) based on the real. By which he means, humans feel like there is “something out there” some kind of numinous power beyond us (some neurobiologists would argue this is an artifact of the human central nervous system, but wev) and 2) that religion takes those individual experiences and gives them shared meaning thus creating “collective effervescense” (my FAVORITE concept of all time).  This collective feeling is triggered by rituals, so religion acts like a big ‘ole feedback loop.

I go to church and the music and incense and stained glass windows make me feel like I’m experiencing something beyond myself, something sacred.  The church tells me that I’m experiencing god.  There are a whole series of social and moral rules and legends and ideas based on the church’s ideas about god.  I believe them because they fit with my transcendent experiences that I have in church (and probably also outside of church).  I go to church with a bunch of other people, we all share this moment of the divine.  Society stays together and we all believe the same thing.

So if you’re craving some great social theory and want to read some of the earliest attempts to connect religion with collective belief, Durkheim is yer man.

2 thoughts on “I am a nerd, Durkheim is a genius”